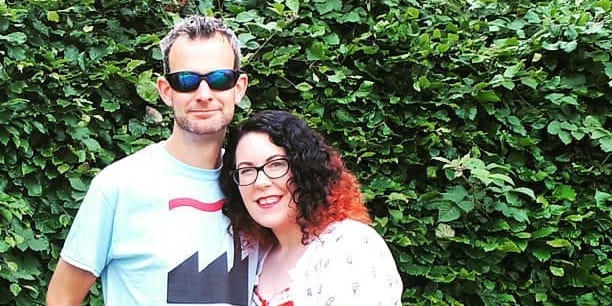 During my adolescence, it was not easy to talk about my sexuality. In my small hometown of Monmouth, UK, straight was the standard. Only a handful of openly strange people lived in our city, and they were seen as ‘different’.

My first experience of coming out was in the 1990s when I was 14. I confided in a friend that I had a crush on a girl at school. It’s been so long I can’t remember if I used the word bisexual or if I just said I like both girls and boys. But I remember my friend’s reaction: shock, disgust, horror and laughter.

I wouldn’t come out again for the next 15 years, and that time it was to my husband.

I moved to Sheffield for college in 1998 and met the man who is now my husband during my first semester. At that time, no one knew that I was also interested in women. I wasn’t ready to come out to the people living in my residence. My sexuality just seemed irrelevant. I looked straight at the outside world: I was a cis woman dating a cis man.

We were married in 2005. I still hadn’t come out to anyone, including my husband, though I had alluded to finding female celebrities attractive. I felt guilty for closing off part of my identity to those closest to me, but my previous coming-out experience had made me wary.

When our son was born, it felt like there was even less opportunity to embrace my sexuality. Parents at the school gates, colleagues at work and new friends, I heard the words “husband” and “son” and assumed I was straight.

In my late twenties, I finally told my husband the truth

I was very drunk one night watching TV with my husband. Dita Von Teese was a guest on the show we were watching, and my attraction to her led me to blurt out, “I’m bisexual.”

A heavy silence. My husband then said a very simple but thoughtful word, “OK.”

I assured him nothing had changed; I still just wanted to be with him. His reaction to all the information was so relaxed that I wished I had shared my sexuality sooner. Inspired by Von Teese, we booked tickets for a local burlesque show the following month.

Buoyed by my husband’s positive response, I came out to my closest friends. It was a much more positive experience than my previous attempt to come out because I was selective about who I told and lived in a more diverse area. My grand revelation was well received and I felt accepted by the people whose opinions mattered to me.

Later on, I read “This Book Is Gay” by Juno Dawson and realized I wasn’t bisexual, but actually pansexual — which simply means I’m attracted to people regardless of gender or sex. When I told everyone about my new identity, there were more questions, but that was to be expected. Pansexuality isn’t really discussed in the media or general pop culture. I didn’t blame people for not knowing about pansexuality, because I had barely heard of it myself.

From then on I always say pansexual when asked about my sexuality. I’ve even added pink, yellow, and blue hearts to my social media bios to represent the pansexual flag.

Although my husband and friends accepted me, I worried that I wasn’t gay enough to be part of the gay community

Once I had a label that represented me, I wanted to get more involved with the LGBTQ community. What surprised me most was how, even in one of the UK’s largest cities, opportunities to meet other LGBTQ people were limited. Bars and clubs took center stage, which didn’t appeal to me.

Although pansexuality falls under the queer umbrella, I feared I wasn’t gay enough, especially since I’m in a heterosexual relationship.

I turned to queer media. Shows like “Queer Eye” and “It’s a Sin” gave me a sense of belonging, as did LGBTQ literature I bought at London bookshop Gay’s the Word.

Seeing strong LGBTQ communities on my TV screen and in the pages of my favorite novels finally prompted me to seek out my own queer family. Eventually I joined the Rainbow Blades, the Sheffield United Football Club’s official support group for LGBTQ people and their allies. It’s been quite a journey, but I know the friends I’ve made through Rainbow Blades will be friends for life.

Best of all, my husband and son come with me to the meetups and proudly wear pins that show they are LGBTQ allies – my allies. Finally I have found the place where I belong.